Our company sells polyethylene film for various purposes in Chelyabinsk and other Russian cities. In our range of products you will definitely find what you need! 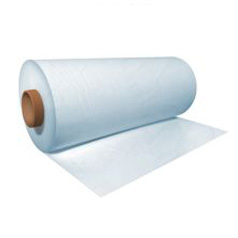 A canvas is a film made in one layer along the entire length. Widely used for packaging of various products. Can have different length, width and thickness, depending on the needs of the customer. In the process of manufacturing a polyethylene sleeve, the latest equipment is used, which guarantees high quality of the products. 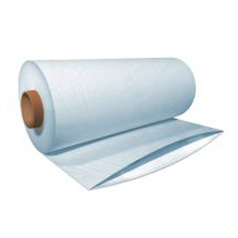 The sleeve is a film in the form of a flexible tube, wound into a roll. This type of product has proven itself in agriculture and construction, as well as in the food industry. The scope of its application is wide enough and is used wherever a strong and transparent packaging is needed, protecting the goods from the external environment. This type of product is also used in the manufacture of bags. Non-fixed length allows you to pack goods of arbitrary dimensions. 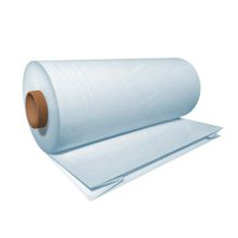 A rebated sleeve is used to package products on pallets. It can be bricks, various panels, and other construction products. Also on the automatic packaging line, it is possible to use robotic manipulators. Such a film is made only from high-pressure polyethylene. The advantage of packing in a folded sleeve is a reduction in time and cost. 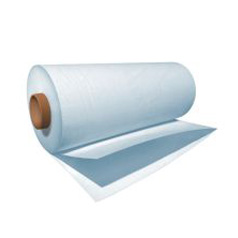 Half-sleeve is a folded cloth, folded into a roll. The field of application is quite extensive. For example, a polyethylene half-sleeve can be used in the food industry for the packaging of bulk products, in agriculture for hiding greenhouses or greenhouses and so on. The undeniable advantage of this packaging material is its availability and low cost. Semi-horn HDPE has good strength and frost resistance.

Collapsed in a roll tablecloth with a total length of 5.5 meters and 1.4 meters wide – a convenient option for cottages and picnics. Five pieces in one roll. Easily divided into 5 tablecloths 1.1 X 1.4 meters. on the perforation line. It is made of white polyethylene with ornamentation and decorative border. According to your order, a batch of tablecloths of 10 pieces per roll can be produced. It is possible to make any color table cloth, with any color printing.

The use of a perforated film not only promotes an increase in the period of preservation of goods, but also guarantees protection from external actions. Small perforations, working as micro valves, ensure hygienic packaging during transportation and storage. When manufacturing, use the hot and cold puncture method. For you, we will individually produce any sizes of film webs with hot and cold, frequent and rare, large and small perforations, taking into account the technical characteristics of your filling machines, which can work at the maximum possible capacity.
Among the producers of perforated films UralPak is the legislator of this production. We were the first in Russia to certify a perforated film for cooking cereals in bags. At the moment we can offer 6 kinds of such a film, including absolutely transparent. 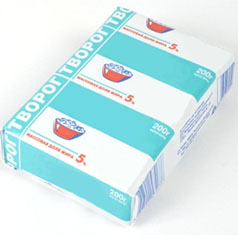 An interesting field of application of melon-filled concentrates is the production of polymeric packaging films such as polymeric paper – films with a high content of fine mineral filler (chalk, talc, dolomite), having sufficient strength, oil and grease resistance, low vapor permeability and well-perceived print.
The resulting film is good for printing, well holds the fold (memory), oil-grease-resistant. The film can be used to pack food products (such as cottage cheese, butter, cheese, etc.) as an alternative to paper and foil. 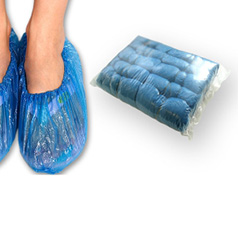 The most common disposable polyethylene shoe covers for visitors to public premises. They are made of different types of polyethylene and special rubber bands. In the case of machine manufacture, a third component is added: the pieces of spunbond at the edges of the shoe cover are welded to hold the elastic band. Shoe covers vary in thickness of the polyethylene film used, quality and type of material, as well as the manufacturing method.

In shoe covers for visitors, a film from 8 to 20 microns is used. Although on boxes with shoe covers from the PRC (in 2009 they occupied 95% of the market) often write not real, but double, with an overestimated thickness. To understand the actual thickness of the film, it is easier to use the weight of the shoe covers. Standard shoe covers of class “20 microns” has a size of 41 * 15 cm, a standard rubber band, weight 2.0 grams / piece.
The material from which shoe covers are made is usually HDPE or PVD. Producers from China often use the material unknown in Russia – chloropolyethylene (CPE), in this case the film is obtained with small pimples, and shoe covers – textured. Also, the quality of the film is affected by the primary or secondary material used in its production.
The reliability of the shoe covers depends on the thickness of the film and the quality of the elastic band elasticity. Depending on the thickness, the covers are able to stand on the leg for 5 minutes to 5 hours.

We produce heat-shrink film of high strength by multi-layer European technology. Thanks to the use of European materials, the strength of our film is twice that of Russian analogues. This allows you to make it twice as thin and save monthly at least 20% of the money spent, and in most cases up to 30%!

This film consists entirely of primary raw materials, this ensures constant temperatures not only within one roll, but also on the scale of all deliveries for many months.

In addition, the operating temperature range is much wider than those films that are now on the market, it allows you to replace the rolls without losing time on the temperature setting of the equipment.

Due to the strength of this film is used at a thickness of 10-12 microns.

Two-layer film for mulching soil (black and white) – the perfect combination of “white” and “black” mulching.
Film for mulching (mulching film) — a thin layer of matter made of polyethylene. The proposed polyethylene has such properties as elasticity, moisture resistance, frost resistance and hygiene. The material is widely used in agriculture
The white side of the film reflects the light absorbed by the plants.
Black side of the film provides the absolute lack of transparency and protection from UV radiation (receives heat and is heated).
• Less heat — reduces the risk of overheating plants.
• Reflects sunlight — plants are further illuminated.
• Suppresses and destroys weeds — without herbicides and weeding.
• Keeps the soil loose — roots “breathe”, it is not necessary to loosen.
• Saves fertilizer — rain does not wash them out of the soil.
• Reduces the incidence of strawberries with gray rot by 80%.
• The soil does not dry out — You rarely need to water.
• The root system of the plants develops more intensively and the harvest You will get faster and more than usual.

Ask a question to a specialist
Scroll Up